Holland & Denmark, a picture of the moment right after the proposal, their enormous happines, love for each other and their families

The marriage of two of the loveliest people I know and I was the lucky designer who was allowed to take care of the invitations. Their wish was to incorporate a super sweet picture that was taken right after he proposed and she had said yes.
Kim and Jonas had thought it all through: their Dutch and Danish families might not be able to communicate with one another so they gave me a list of Dutch/Danish sentences like ‘you look lovely tonight’, ‘we are so lucky’ and ‘Ah, wouldn’t you love a glass of wine too?’

The invitation was sent in Dutch and Danish side by side

The song ‘that’s amore’ was actually about Kim and Jonas, according to the e-invitation for the wedding for friends

A marriage between a Dane and a Dutch also means bringing two families together who do not speak the same language. As love knows no barriers, the couple wrote down sweet sentences with their translations to facilitate conversations during dinner. Isn’t that the sweetest thing on earth? I designed the booklet in such a way that it could be printed on one A4 sheet, folded in 8 and bound with a string. 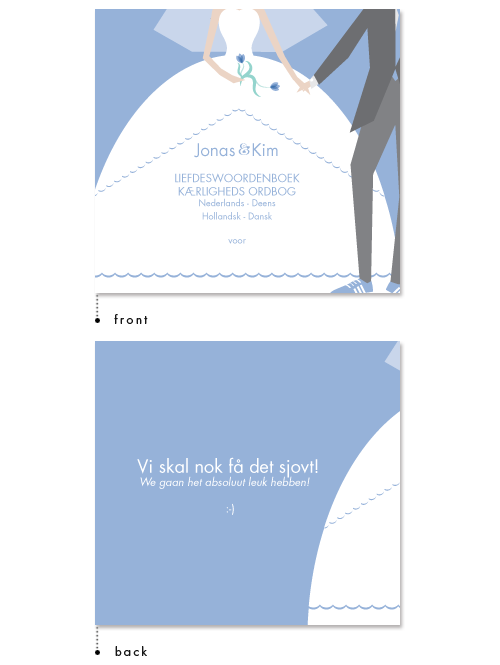